If you have been following along, you may know that I was at the last night of the Tribeca Film Festival in New York this past weekend.  It was there that I watched the final screening of Marvel’s, The Avengers!

Did you know that The Avengers is already one of the biggest movie money makers of 2012?  It hasn’t even opened in the US yet!

That is quite a line up!  Joss Whedon did an amazing job directing this film!  It was in true super hero fashion and all the characters were right on target with what you expect.

I am a huge super hero fan!  Always have been.  I have to confess a huge love for Iron Man.  He and Batman are my super hero loves.  Iron Man has always been one of my favorites mainly because of his sarcastic attitude.  He is everything I love in a super hero.  Being played by Robert Downey Jr. just makes Iron Man even better.  He happens to be one of my favorite actors!

Going in I was wondering if they could really do The Hulk justice.  I have been pretty disappointed with all of the attempts at recreating The Hulk.  I compared all of The Hulks to the original Hulk from my childhood.  I have to say, this movie nailed it for me.  I loved The Hulk character in The Avengers!  He almost stole me from Iron Man…almost…

I was extremely impressed at how well Tom Hiddleston pulled off playing the dark character Loki.  He did a wonderful job playing the “super villain”.  I have yet to see the movie “Thor” and now look forward to it even more.

What you will see a great story, great action, great special effects, great acting and even great humor that will have you laughing out loud.  You will leave that theater a fan!  Even if you have never been a super hero movie type of person…you will be now!  I watched women turn into major “FanGirls” after exposure to The Avengers!

Make sure you stay in your seat when those credits start rolling…there is something that you will not want to miss!

MARVEL’S THE AVENGERS hits theaters everywhere on May 4th!

Accessories provided for me by Vintage Virtue.  She has a whole lot of great stuff!  I will be posting more about this great Etsy artist! 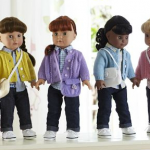 Last year all Lauren wanted was an 18 inch doll that she could get those cutesy matching clothes for.  She was so surprised and happy to find this adorable red headed Götz doll under the tree last Christmas.  She is from the Götz Doll Collection on the Pottery Barn Kids website.  This year there will be a new friend […]